'Four suicide bombers hit a pair of crowded mosques in Yemen's capital of Sanaa on Friday, killing at least 137 people and injuring more than 300 others, officials told NBC News.

The ISIS affiliate in war-torn Yemen claimed responsibility for the attacks, according to Flashpoint Intelligence, a global security firm and NBC News consultant. It was the first large-scale attack claimed by the Sunni militants in Yemen, which has been in a state of chaos since Shiite Houthi rebels launched a violent power grab.

Dr. Alia Saria, head of emergency services at Yemen's Ministry of Public Health and Population, confirmed the death toll to NBC News and said "hundreds" were injured. Mohammed Albasha, Yemen's spokesperson in Washington, put the number of injured above 300. Albasha said the bombers struck Badr and al-Hashoosh mosques during Friday prayers — traditionally the busiest time of the week. Both mosques were hit by two bombers using similar tactics: one would detonate explosives inside the building while the second waited outside for people to flee before blowing himself up, Albasha explained. '

Posted by John Coffey at 4:48 PM No comments:

Only 14, Bangladeshi girl charged with adultery was lashed to death - CNN.com 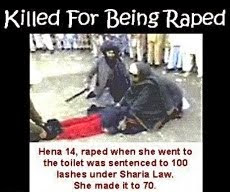